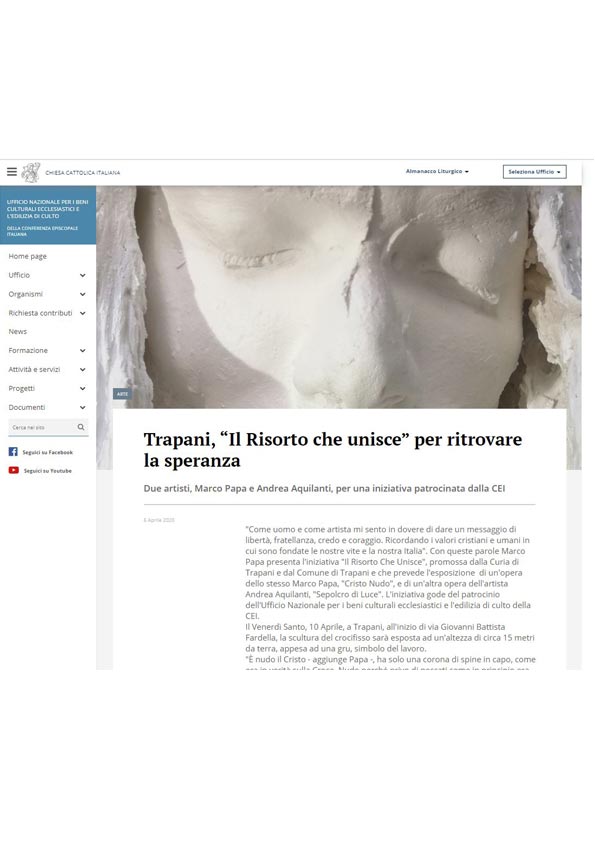 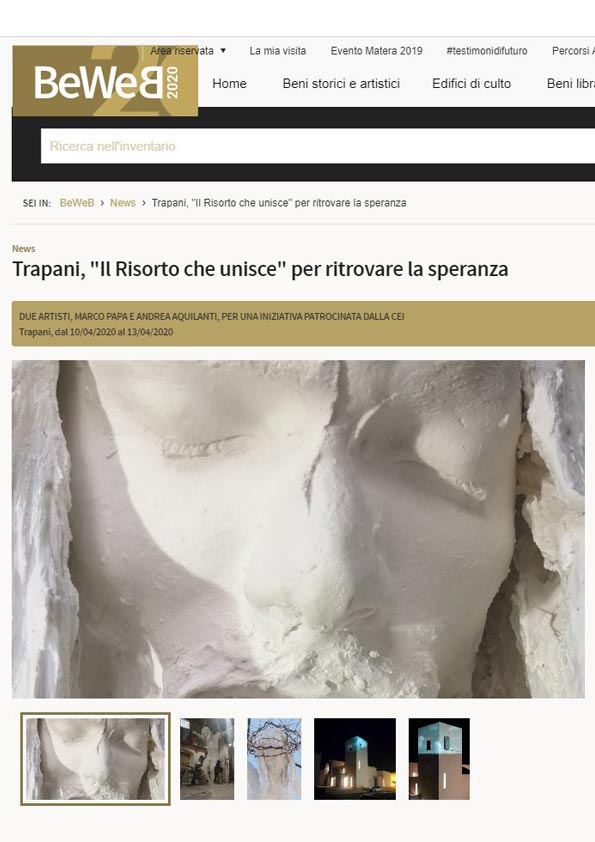 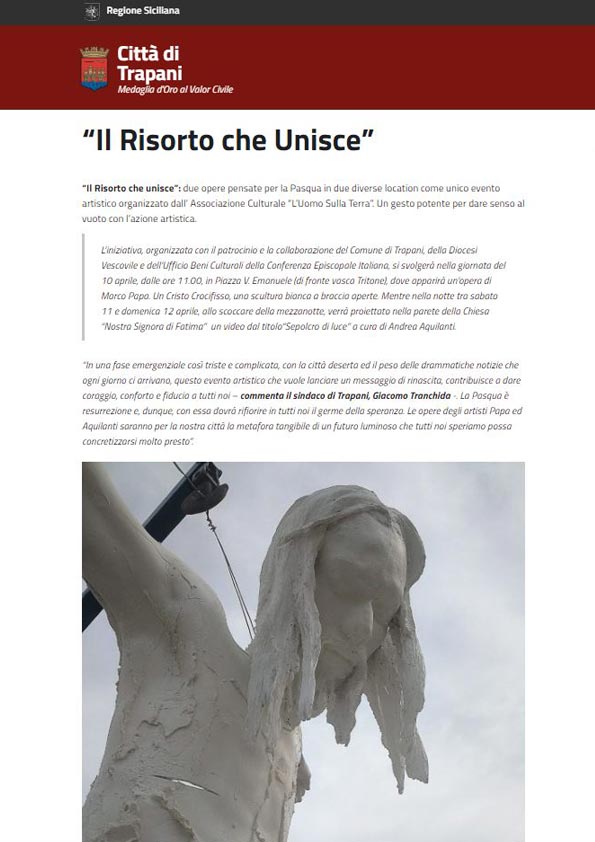 “As a man and as an artist I feel compelled to give a message of freedom, brotherhood, belief and courage. Remembering the Christian and human values in which our lives and our Italy are founded”. With these words Marco Papa presents the initiative “Il Risorto Che Unisce”, promoted by the Curia of Trapani and by the Municipality of Trapani and which envisages the exhibition of a work by Marco Papa himself, “Cristo Nudo”, and of a other work by the artist Andrea Aquilanti, “Sepolcro di Luce”. The initiative enjoys the patronage of the National Office for Ecclesiastical Cultural Heritage and Religious Building of the CEI. On Good Friday, April 10, in Trapani, at the beginning of via Giovanni Battista Fardella, the sculpture of the crucifix will be exhibited at a height of about 15 meters from the ground, hanging on a crane, a symbol of the work. “The Christ is naked – adds Papa – he has only a crown of thorns on his head, as he was actually on the Cross. Naked because he was free of sins as Adam was in the beginning”. “Sepolcro di Luce” by Andrea Aquilanti will instead be displayed on Easter Sunday, April 13, on the highest part of the bell tower of the Church of Our Lady of Fatima. It is a video projection, which lies on its walls and in the openings of the bell tower, evoking the Holy Sepulcher, in which, among others, sequential images of clouds, dawn, birds in flight, the moon, rain. Together with the sound of the freed bells, the divine light that in turn erupts in the world will be evoked, renewing the ancient covenant between God and Man. “At this moment – Papa comments – we feel the absolute need to overcome the catastrophic nihilism of relativism and the Risen One who unites recomposes the separation between the human being and the Whole in the Eternal”. At the end of the temporary installation, Marco Papa’s sculpture will be brought to the San Rocco Museum in Trapani. 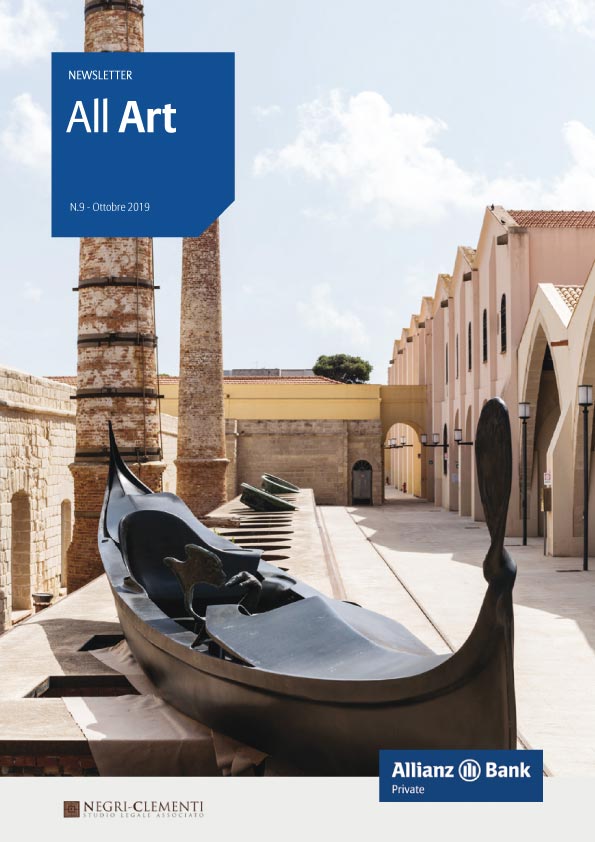 October 2019, in the issue 9 of All Art, the interview with Marco Papa comes out. All Art is a newsletter, deals with art and finance, and is created by the Milan law firm Negri Clementi and Allianz Bank. 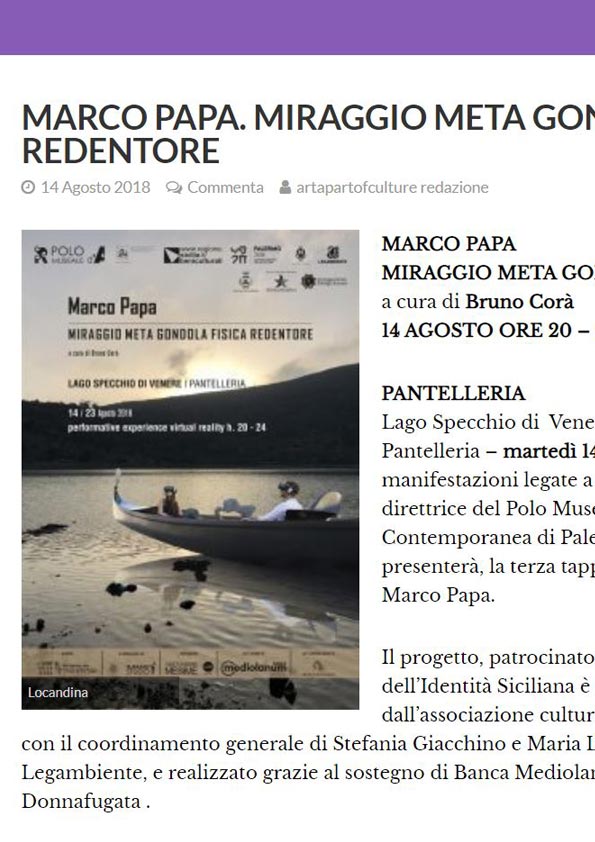 Art A Part Of Culture

In the context of the events linked to Palermo Capital of Culture, the director of the Palermo Regional Museum of Modern and Contemporary Art, Valeria Patrizia Li Vigni will present the third stage of the exhibition project by the artist Marco Papa.
The project, sponsored by the Department of Cultural Heritage and Sicilian Identity, is curated by Bruno Corà, organized by the cultural association L’Uomo sulla Terra and by Mesime with the general coordination of Stefania Giacchino and Maria Letizia Cassata, with the patronage of Legambiente, and created thanks to the support of Banca Mediolanum and the technical contribution of Donnafugata.
Miraggio Meta Gondola Fisica Redentore, is the third stage of an important project already presented in Favignana at the Ex Florio Plant and in Palermo inside the Palazzo Belmonte Riso Showcase, which will help the Association Man on Earth, (founded in Erice by the artist Marco Papa), to lay the foundations for the Al Di Là Del Mare project, whose aim is to redevelop a wider territory in western Sicily, involving other artists.
The Opera, a carbon fiber sculpture, will float on the surface of the Mirror Lake of Venus, once called “Water Bath”, and will appear as a metaphysical mirage, an unexpected vision.

We use cookies to ensure that we give you the best experience on our website. If you continue to use this site we will assume that you are happy with it.Ok